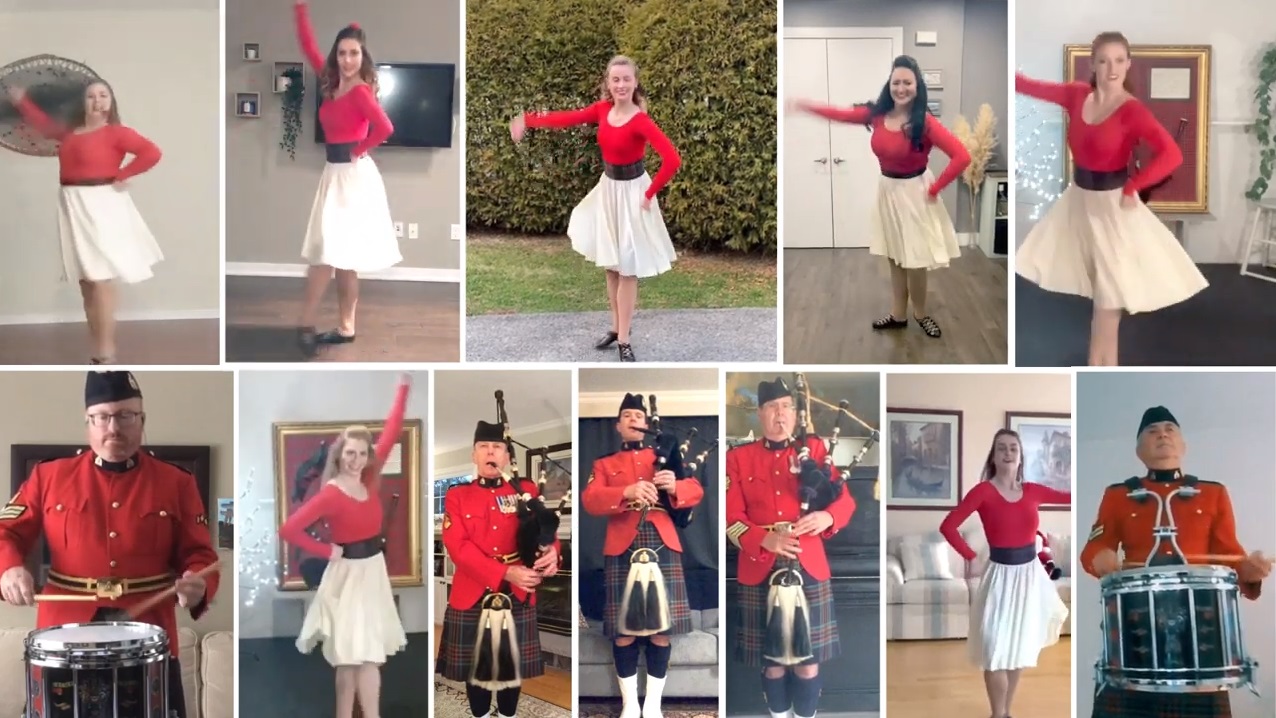 The RCMP Pipes, Drums and Dancers first performed a concert at the Perley and Rideau Veterans’ Health Centre in December 2008 as a “Christmas present” to the Veterans and staff. The audience much enjoyed the show, so in 2010, the band decided to make the concert an annual event. Since then, the band has presented a show every year, usually in April. It give us a chance to do a “dress rehearsal” to try out all the new material for the coming year and provides a kick off to summer for the veterans.

The band is proud to honour and recognize the veterans at the residence and not only applaud the service they had provided to Queen and Country, but to give them an evening’s entertainment far from their normal daily routine.

Sadly, the pandemic prevented the band from doing the annual show in 2020 and again in 2021, so an alternative was found. The band members and dancers recorded individual videos of their tunes and dances. These were passed to our multi-skilled Dance Team leader, Kelsey, who tied them all together into a great 30 minute show. The video was passed to the Perley Rideau entertainment people in early May. We are now happy to share this with a wider audience. We hope you enjoy it.

Here is the link to the video on YouTube 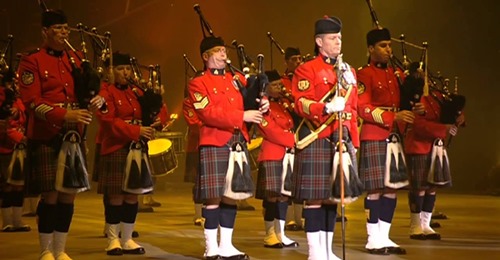 Over the week of activities, it was estimated that the bands entertained over 200,000 people. There were bands from Belgium, Germany, Chile, France and Russia as well as all the Canadian bands. Three soloists from the Russian Red Army Choir were the special guest.

This was the fourth and final time that an RCMP Composite Pipes, Drums and
Dancers performed at the FIMMQ. Unfortunately, the FIMMQ ceased operations after the 2013 show. It was a huge disappointment to all who felt that this was one of the best
exhibitions of military brass bands in existence.

It was a great performance, which you can watch here: FIMMQ 2012 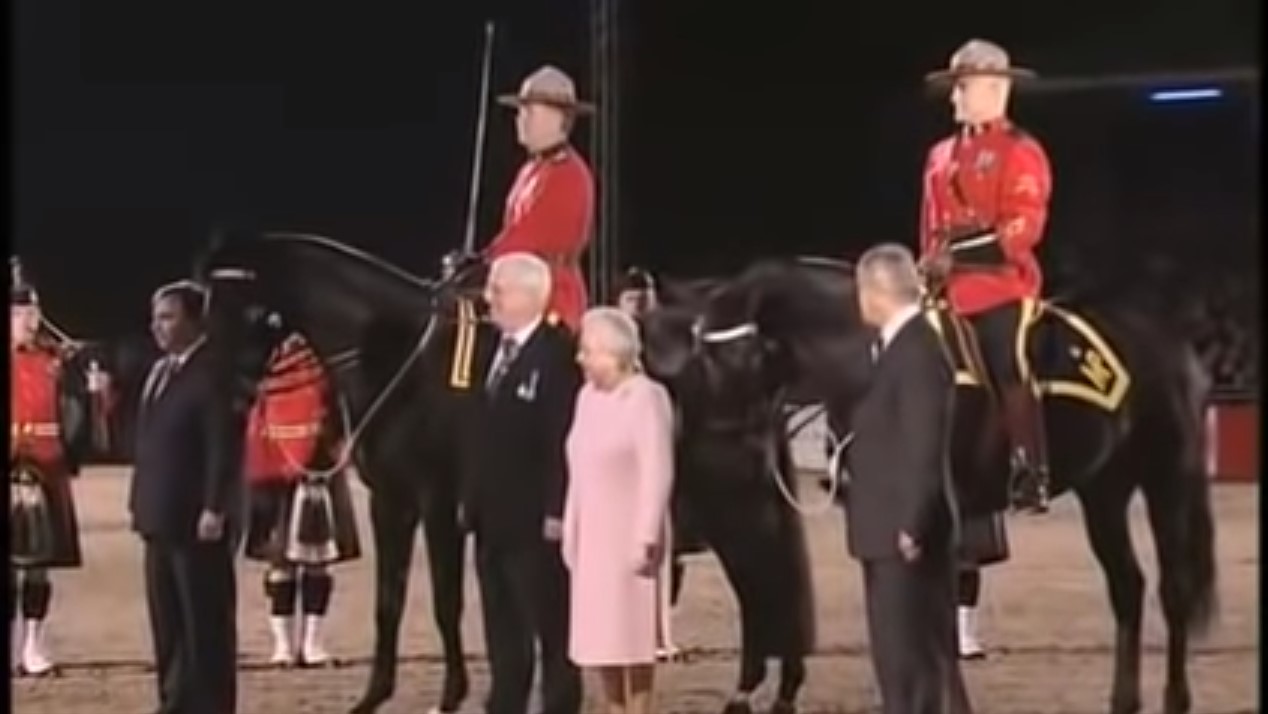 The RCMP Pipe Band traveled to the U.K. in 2009 to participate in the Royal Windsor Military Tattoo. The occasion was the presentation of RCMP Horse “George” to Her Majesty the Queen. “George” was the fourth black horse presented to Her Majesty by the RCMP. These beautiful horses are used for the breeding program and to be ridden on ceremonial occasions.

The video shows the full presentation ceremony This includes the introduction by Leslie Neilson, which gives the history of the presentation of RCMP horses to Her Majesty. The band marches in with “George” at about the 3 minute mark.

You can read more about “George” and the presentation in the CTV News article here. Enjoy the video on YouTube, by following this link.

The band had to celebrate Robbie Burns’ birthday in January 2021, but was not able to meet physically due to the lockdown. We did a virtual dinner instead; everyone in their own homes, but connected through Zoom. The physical distancing didn’t prevent members from having a great evening of fellowship.

As a little “extra”, several videos were prepared and played for those attending, Some of the other videos have been highlighted through posts on the website here already, but we saved the best for last. Our illustrious Pipe Sgt Donald Corbett and Drum Cpl Andy Main collaborated to compose this great story of the trials and tribulations of a pipe band in the era of lock down, but looking hopefully at the end of it!

We hope you find it as entertaining as we did. Follow this link to the video and sit back and enjoy! 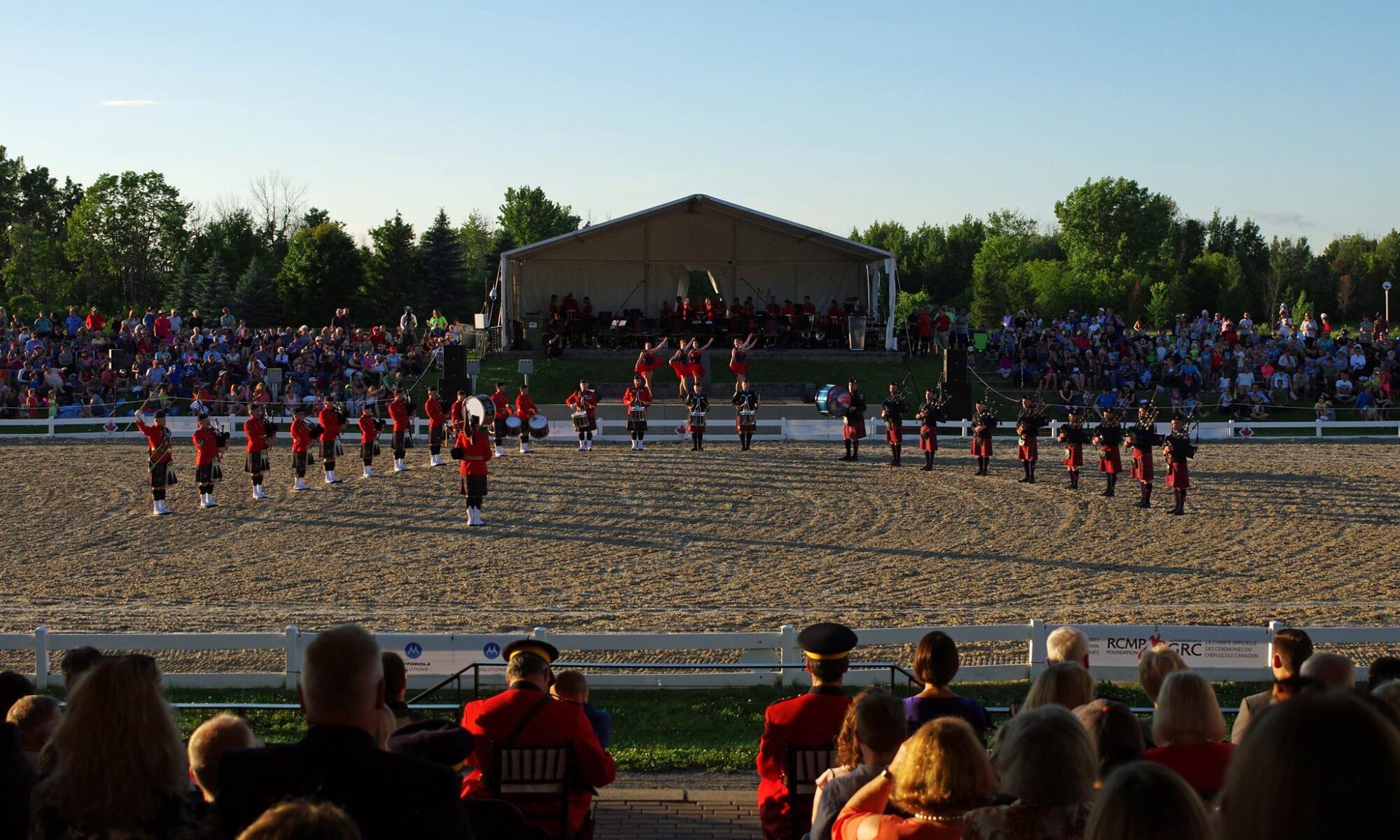 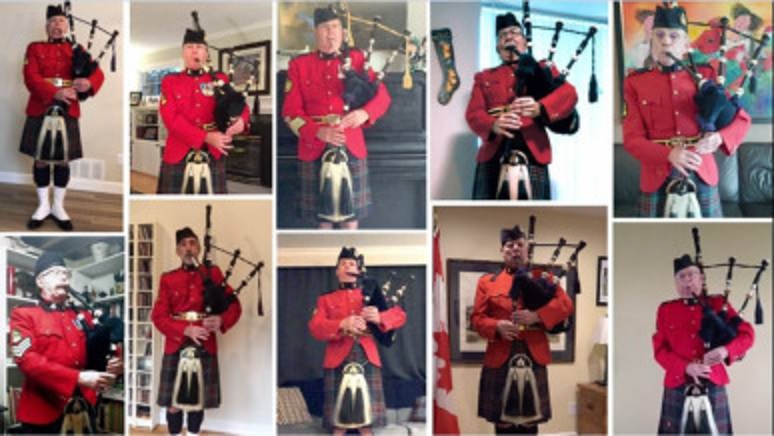 Here is a second virtual performance by the RCMP Pipe Band and Dancers of National Division. This video presents the dancers performing to the tunes “In Memory of Herbie MacLeod”, “Stone Frigate” and “High Drive”. Band members and dancers recorded their inputs in isolation (because 2020) and provided them to our Dance Team Leader Kelsey Stewart. She used her technical and artistic skills to synchronize the videos and produce this excellent video.

This video was first presented at the Scottish Society of Ottawa’s Hogman-eh celebration on 31 December 2020. It is available on YouTube at this link: 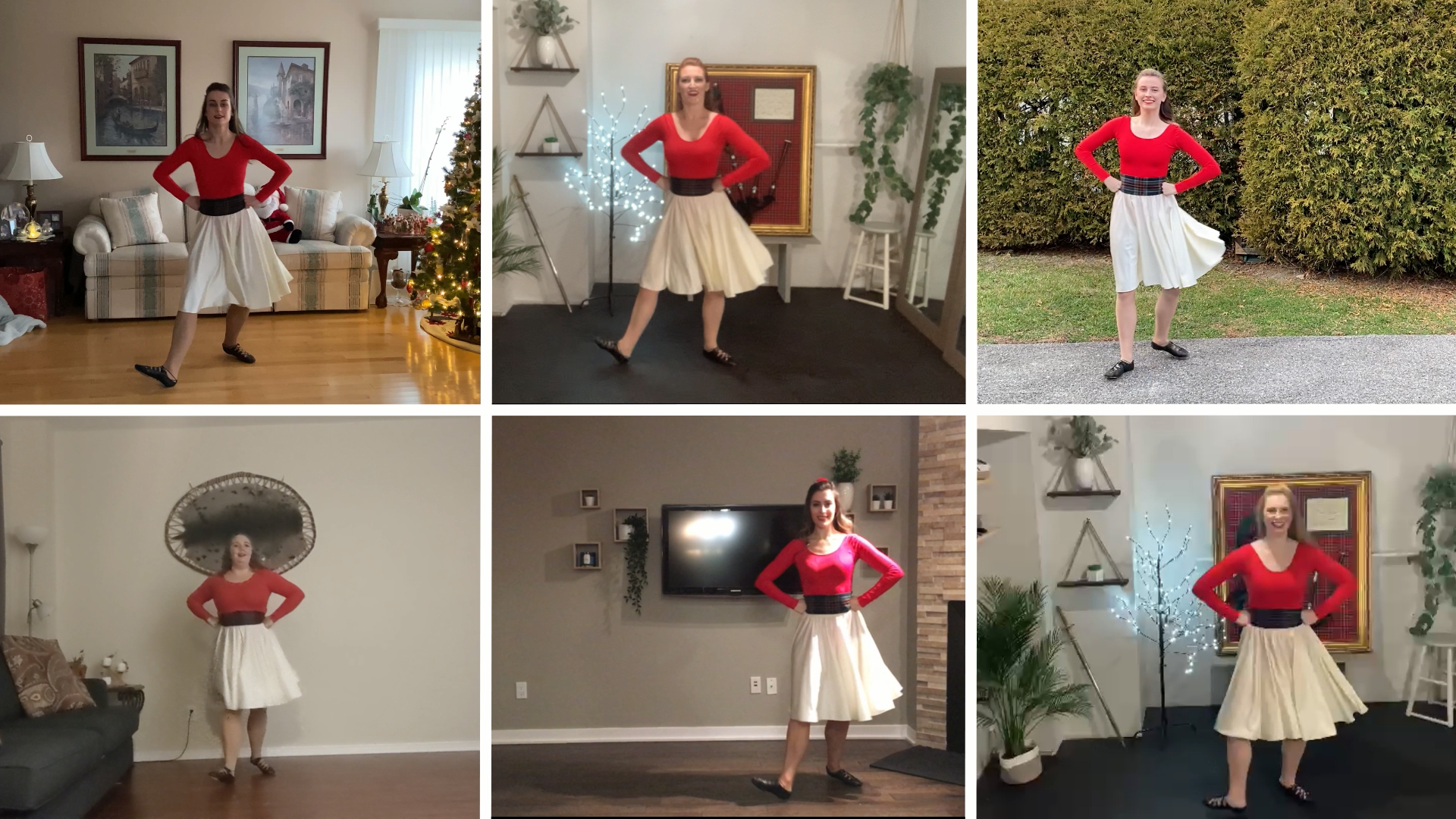 Because of the regulations prohibiting gatherings, the RCMP Pipe Band and Dancers could not assemble as a band after March 2020. While frustrating, that did not stop the members from wanting to perform. In the Fall, the band was asked to provide content for the Scottish Society of Ottawa’s “Hogman-eh” celebration on 31 December 2020.

The dancers decided to submit a unique dance to the tune “Corky’s Gift.” Each dancer provided a video of their own performance of the dance and the Dance Team’s lead, Kelsey Stewart, provided the technical expertise to bring the videos together into a beautiful presentation.

Corky’s Gift was composed by Pipe Major Graeme Ogilvie as thanks to Corky Muir, wife of piper Graham Muir.  He wanted her to have it as a gift – a gesture of thanks for the many meals Corky had prepared and delivered to the Ogilvie residence during his wife, Debbie’s, protracted battle with cancer. P/M Ogilvie played the tune for the video and was accompanied by his nephew Cameron Ogilvie on guitar.

The tune is part of the band’s regular repertoire, but this video presents it in a very different way. Enjoy! You can enjoy the video by clicking on this link 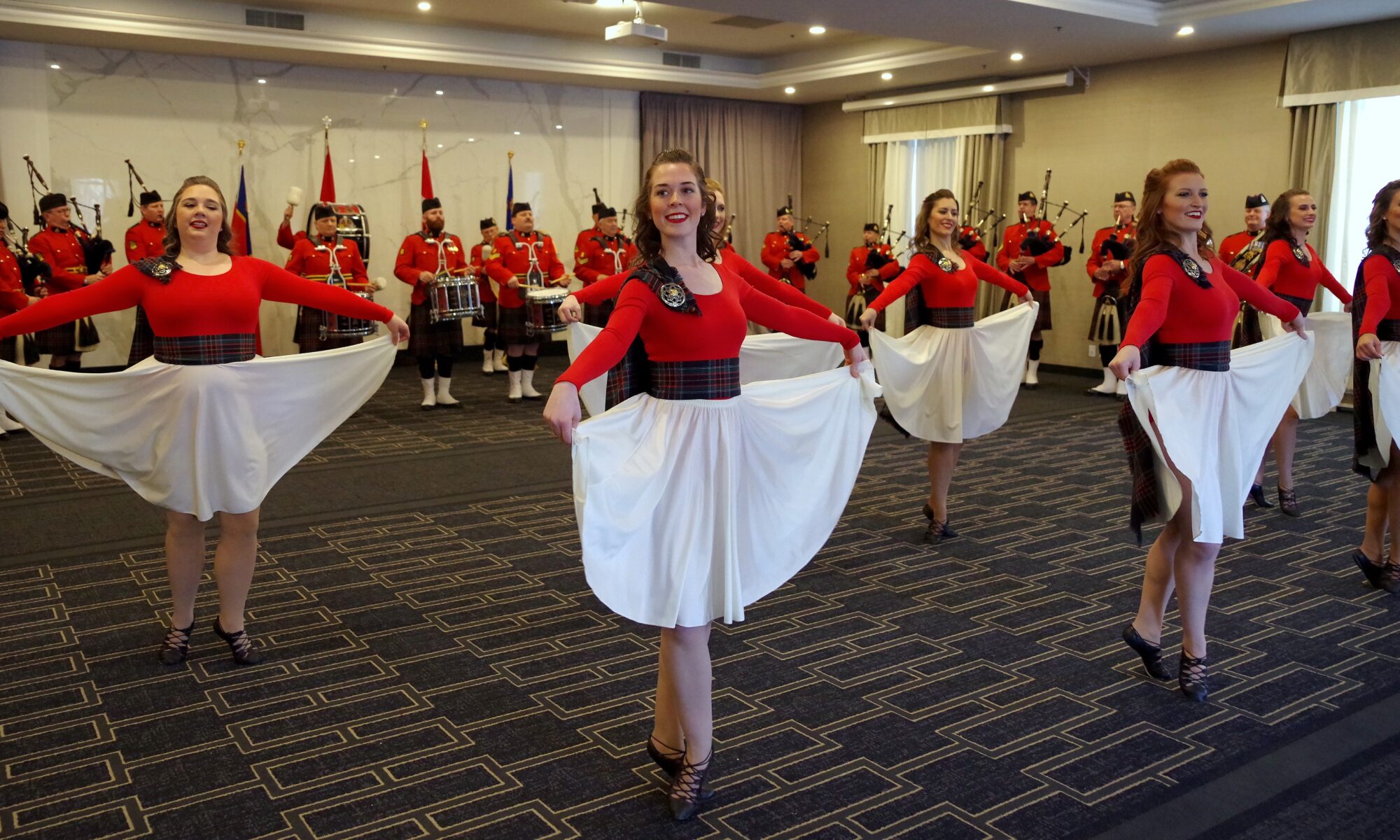 Considering how limited the “free” time in 2020 was, the band still managed to get in some interesting performances, starting with the production of the video for Governor Bruce’s Ramparts. You can read the full story of that event here. The cover picture for this post is from that recording session, which was actually the last time the band and dancers performed together. Over the summer, small contingents of pipers and drummers gave short shows at a number of Long Term Care homes to raise the spirits of the residents. We also snuck in a show for Canada Day at the Orleans Legion.

Like many organizations in 2020, we ended up resorting to Zoom meetings for practices. We even had our AGM, Regimental Dinner and our Christmas party by Zoom. This kept us in touch and kept our tunes fresh in our minds, ready for when we can finally get back to live shows. We hope 2021 brings normalcy back soon, to permit the band to bring our music to events again.

This issue is the final installment of the RCMP Pipe Band History Series that we have been posting over the course of the year 2020. The series was intended to mark the 20th anniversary of the National Division Pipe Band by reflecting on where we’ve been. What a history! While 2020 has certainly been a quiet year, the band has done an incredible number of memorable events in prior years. The number of trips and tattoos in which band members have participated is extraordinary. Bands or mini-bands have performed in China, Hong Kong, Mexico and the Netherlands as well as London and Edinburgh, Las Vegas and New York. We have been involved with many Military Tattoos and celebrations across Canada from the Maritimes to the Prairies. We hope you have enjoyed reading these stories and maybe will go back and have a look from time to time.

You can access the full story for 2020 here. Enjoy. 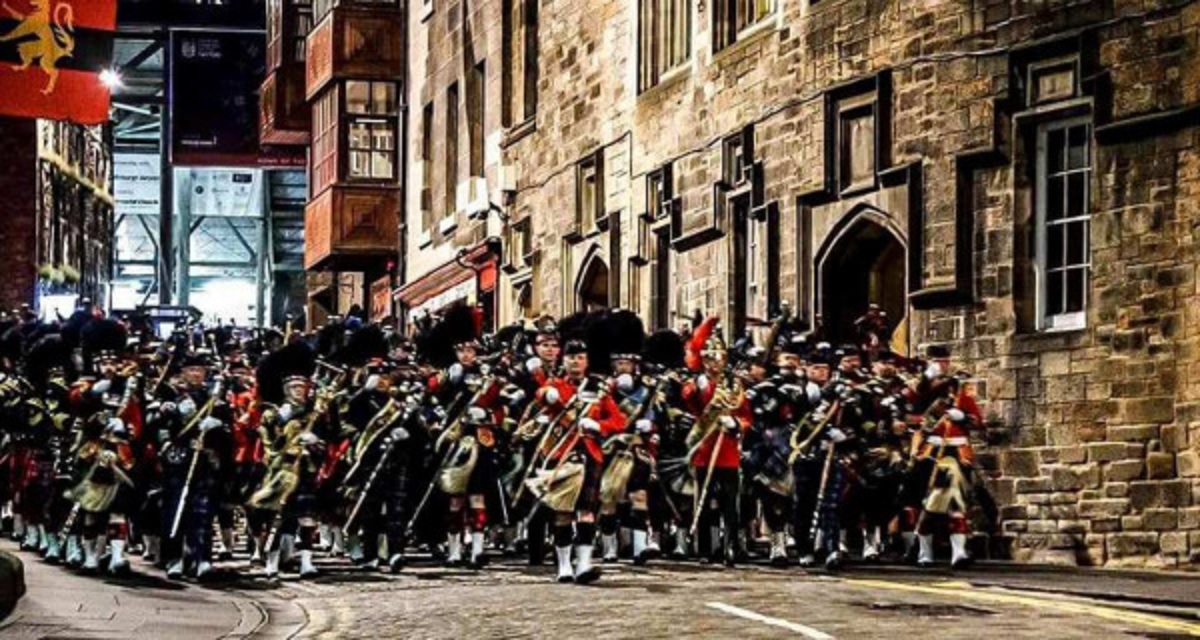 The band history series is almost caught up, with only one year left to summarize. Each year over the history has brought challenges, new events, new accomplishments and ever higher demands on the volunteers. 2019 was definitely a pinnacle year, with the presentation of a concert at Dominion Chalmers, followed by participation in the Royal Nova Scotia International Tattoo and the Belfast Tattoo and the Royal Edinburgh Military Tattoo; all of which are very demanding events in their own right. The cover photo for this post is of the Edinburgh Tattoo massed pipe bands marching down the Royal Mile, led by our own Pipe Major, Brad Hampson. There were many highlights during this year, but sad times too, as well as changes in the band’s leadership team and supporting elements.

Read all about this remarkable year by opening the PDF document here. Enjoy the many photos and anecdotes provided.